The Indian football team finally has a new sponsor!

Exciting times are ahead for Indian Football given that India will be hosting a tournament like the FIFA U-17 world cup later this year. On top of that India recently has hit a purple patch with 8 wins in a row which is testimony to the fact that Constantine’s men are gradually taking strides towards a better future for football in the country. 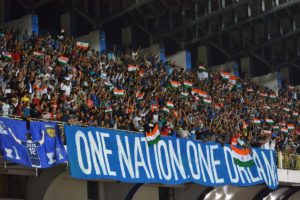 Amid the recent spike in the fan base and keeping in mind the growing popularity of football in India, Hero Motocorp, the two-wheel manufacturer has extended their association with Indian football. Hero MotoCorp is set to sponsor the Indian national teams after being associated with the Indian Super League (ISL) since its inaugural edition as a title sponsor. The Indian motorcycle and scooter manufacturer had also decided to sponsor the I-League, the country’s premier division league and the Federation Cup which is a knockout-based tournament as well. This is the first major sponsorship deal for the national team after the Panasonic contract came to a close in December 2012. Panasonic had penned a deal in January 2010 for a period of three years. The AIFF was looking to sign Oil and Natural Gas Corporation (ONGC) back in 2013 but the deal never came through.

India is now ranked in the top 100 in the world and has won both their Asian Cup qualifiers to be on course to make it into the continental championship in 2019. With the Indian football team finally locking up a sponsor, what do you think has resulted in the sudden rise in the popularity of the sport? Is it the scintillating form of the men in blue or something else? Let us know what you think.