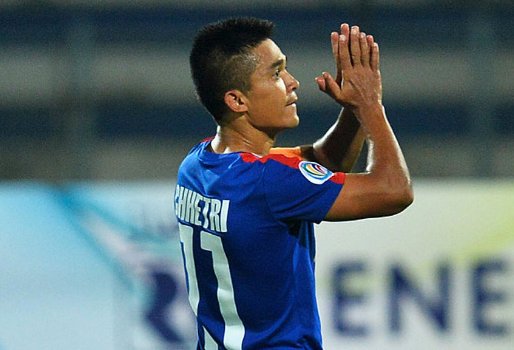 Bengaluru FC faced Maziya yesterday, a fixture that would decide the fate of the team, whether they would make it to the AFC Knockout stage or no. With nine points from five matches prior to kickoff, it was a ‘Must win’ game to make the cut as only one team would qualify from each group.

Captain Sunil Chhetri wasn’t even supposed to start. He had pulled a hamstring less than three weeks back, and with the Indian team set to play a critical AFC Asian Cup qualifier in less than a fortnight, it was important to see to it that Chhetri could maintain his fitness for the Indian team as well.

But in the 57th minute of the game, the skipper showed why he is one of the best this nation has to offer! Take a look at his amazing free kick..

Bengaluru with last night’s win proceed into the knockout stage of the AFC cup.

For one last time this season, @bengalurufc let’s do it the only way we know how – Like Champions! #AFCCup #BFCvMAZ pic.twitter.com/HZYm6jTEr0

Ur a legend @chetrisunil11 . Don’t need any Bollywood biopic or a RajyaSabha seat. U’ll always be the biggest star for us fans! #BFCvMAZ https://t.co/9Vxx8ets10

Loved Bengaluru’s triumph over Maziya? Leave your thoughts in the comments below..