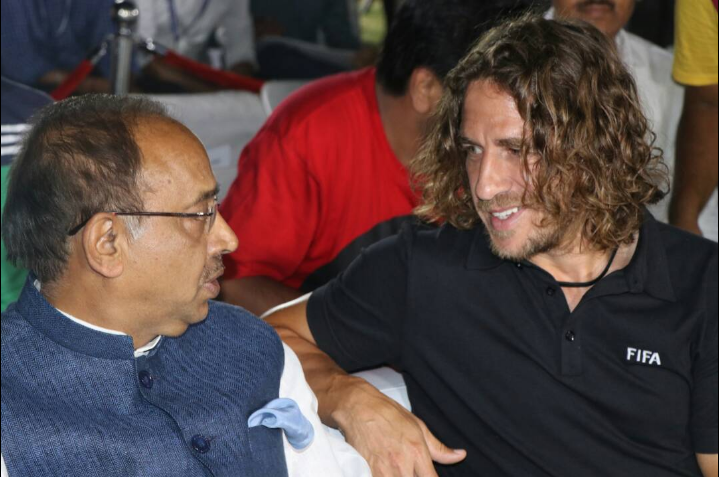 Former football World Cup champion Carles Puyol on Monday handed over the first lot of tickets of the upcoming U-17 FIFA world cup to the descendant of Mohun Bagan’s 1911 IFA Shield-winning captain. But amid the ticket launch ceremony and all the fanfare, what stole the spotlight was the blooper speech of our honourable minister of sports, Vijay Goel.

To start with, Goel said, “Indian players will give their breast,” leaving the crowd including the media, fans and officials, in splits. And to make it worse he pronounced the name of Barcelona captain Andres Iniesta wrong standing right next to Puyol. If all these errors could be forgiven, he had some more in store in the form of facts when he showed the inadequacy of his assisting staff who writes his speeches. He mentioned that Puyol won the Champions League in 2006 and 2010, when in fact, he won in 2006, 2009 and 2011 leaving even Puyol smirking due to the mess up.

After all the goof ups Puyol later played and officiated a short five-a-side game with local kids before heading for some time with his die-hard fans. “I was very curious to discover the country and its people. It gives me immense joy to confer this honour,” Puyol told the media after handing over the tickets to the 80-year-old. “I am very happy to be here in India. It’s a great occasion. I hope to be here in India in September when the U-17 World Cup gets under way,” said the Barcelona legend before heading to his hotel.

So the ticket launch went rather hilariously, how will the tournament pan out?