FIFA is going ‘desi’ with the arrival of World Cup! 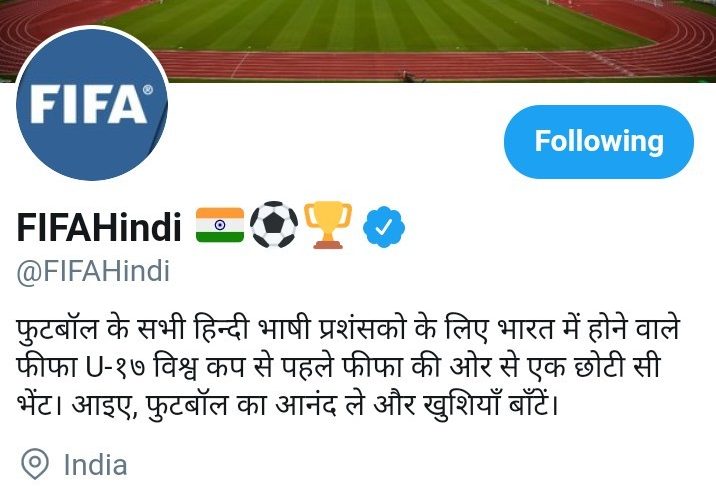 The U-17 World Cup, the first-ever FIFA competition to be hosted by India, launched the twitter account — @FIFAHindi to cater to football fans in the most widely spoken language in the country. The @FIFAHindi account will offer fans real-time updates on the tournament, take them on a journey across all six venues, as 24 teams compete for one trophy. The account will also inform fans about important information related to their fan journey such as play-by-play updates, photos from the event, behind-the-scenes videos and share the very best of their user-generated content, as #FootballTakesOver in India. FIFA will be the first global sports federation to do so and it just goes to show how football is coming to Indian shores.

“At FIFA we are committed to further deepening our engagement with fans around the world, and enabling them to share their love of football. We are very excited and proud to create this new channel,” Fabrice Jouhaud, FIFA Chief Communications Officer, said in a statement. “We know Indian fans are not only excited about the FIFA U-17 World Cup, but are huge supporters of the FIFA World Cup too. So we will be closely analysing the success of this account over the next four weeks.”  Aneesh Madani, Head of Sports Partnerships, Asia Pacific, Twitter said “With the launch of this new Hindi Twitter account, FIFA is transcending the barriers of language and enabling even more access, as the first-ever FIFA event in the country kicks off.”

The World Cup vibe is here and ever growing and FIFA going ‘desi’ just adds to the excitement. The madness starts tomorrow and so does a new era of Indian football.